A very close friend of this reporter passed away one-day short of her 63rd birthday on Wednesday, June 27. Las Vegas entertainer Jeneane Marie Cranert lost her battle with cancer and passed away at home with her daughter Briahna and family at her bedside.

For those who never met Jeneane, nor ever heard her sing, you missed the opportunity to meet and hear an exceptional human being. For those who surrounded her with love and energy during her lengthy battle with the disease, she was their “Wonder Woman” who never gave up. She fought to the very end.

I first met Jeneane in 1979 when she was singing in the lounge at the Frontier Hotel. We became friends, and she honored me every time we got together, with that terrific smile and a big (and I mean huge) hug. She worked all the top lounges in those days and hit the road a few times to extend her reach to the world. And the world responded by giving her Standing Ovations where ever she would be. She was a “belter” with a three-octave range.

One of those standing ovation nights took place at the Sahara Tahoe Hotel in the early ‘80s when Frank Sinatra (who appeared at Harrah’s, but frequently would have dinner at the Sahara) walked past the lounge and heard this fabulous voice coming from the stage. As Mr. Sinatra later stated, “I couldn’t believe what I was hearing!”  He, paused, and continued his walk to the restaurant. Management was called and a time was set up where she would perform for him personally in the lounge. She had no idea that she would be singing for “Ol’ Blue Eyes.” She was simply told to be there to perform, but when she walked out on stage she saw who it was: Frank Sinatra and his entourage, including his body guards were sitting in the lounge.  Mr. Sinatra had come to audition her personally. After she finished, she went to her dressing room.  One of his closest friends, Jilly Rizzo, followed her and knocked on the door.  When she opened the door Rizzo calmly informed her that Mr. Sinatra was interested in her opening for him, and would she come with him to meet ”the boss.”  She opened for “The Man” three times over her career.

There is a story I must tell now. Jeneane and I discussed it when we went to dinner recently and I told her that I wanted to tell story. She asked me to not write about it until she was gone, why wait I have no idea, but I promised her. So here it is as told to me long ago and confirmed by Frank many years ago. Sinatra had contacted a good friend of his, Bob Hope, and told him about this terrific singer who he should take on his next road tour, and especially his next USO tour. Well, Jeneane at that time was being managed by a lady who had helped her early in her Vegas career. She told her friend about the chance to go with Hope, and her friend/manager said she had her booked in Vegas for the same dates and couldn’t cancel them.  “It would destroy you in Vegas, and you would be black-balled all over,” the so-called manager told her. Jeneane believed her and turned down the opportunity of a life-time. Who knows what would’ve happened with her career had she accepted the offer extended to her by Mr. Hope?

Born in Cincinnati, Ohio on June 28, 1955 she was encouraged by both her mother and father to be in show business. First came dancing, then acting, and modeling.  With some extra influence from her choir teacher in the 7th grade, her passion for singing began.  She began performing professionally at the age of 15.

After high school graduation, she joined a pop band named “Colored Rain” and toured the nation, doing shows in Alaska, California, and Texas. During a stop in Las Vegas in 1979, she climbed on stage in front of Don Rickles, who she said liked what he heard. As they say in show business, the rest is entertainment history.

With a career spanning nearly 50 years, Jeneane Marie reached the pinnacle of her career with Sinatra that’s for sure. However, she would always be available for benefits and she appeared numerous times on the Jerry Lewis Telethon. Over the years she appeared on stage with Wayne Newton and Barbra Streisand, and opened for many stars including George Carlin, Liberace, Don Rickles, BB King, Mel Torme, Josh Grobin, Tanya Tucker, and Bette Midler to name just a few. She also performed for major corporate events across the country.

She once told an interviewer during her battle with cancer, “Cancer is the best thing that ever happened to me, because it grounded me again. It’s brought me back to the foundation of everything I know.” That statement is very deep and one that many may not quite understand, but if you knew Jeneane Marie, then you understand the spirituality behind it. She never gave up. She fought hard, especially for her daughter, her family, her friends, and her many fans. Sadly, her battle to remain with us didn’t happen.

Her “Angels-Warriors” as she called a group of ladies (almost everyone being successful singers too) who surrounded her during her battle have lost a true and loving friend. The Angels in Heaven have already escorted her to the “Heavenly Choir” where her voice will ring out, loud and true forever, and where she will no longer sing in pain.

Over 600 guests gathered for a sold out show at the Foundry at SLS for Golden Rainbow’s 32nd annual Ribbon of Life, raising nearly $85,000 for critically needed services for those living with or affected by HIV/AIDS.

Edie, from “Zumanity,” and Sean McAllister, from FOX 5’s MORE Show, served as hosts for the show as they introduced over 150 performers from more than 30 Strip shows. Entitled “The Show Must Go On,” the original production featured numbers influenced by classic Broadway musicals and the iconic British performers and composers, including a George Michael medley, “Jumpin’ Jack Flash” by the Rolling Stones, “Mercy” by Duffy, “Let’s Dance” by David Bowie, a Queen medley, and many more. 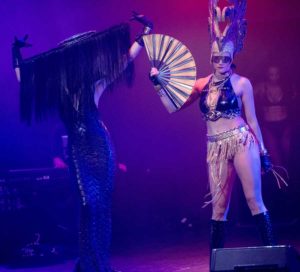 During the show, a heartfelt video was shown, show casing a few of Golden Rainbow’s client stories and how the organization has changed their lives. Golden Rainbow Executive Director Gary Costa and Ribbon of Life Producer Pietra Sardelli greeted the audience and thanked them for their support.

“The demand for Golden Rainbow’s client services are still tremendous,” said Costa. “Until there is a cure and the stigma of HIV/AIDS is gone, we will continue to educate the community and fight for an AIDS-free Nevada. Thank you to all the performers, musicians, and volunteers that have donated their time and efforts to put on this amazing show.”

Celebrity Entertainer Jeff Civillico, best known as an award-winning comedic entertainer on the famed Las Vegas Strip for more than a decade has been named “Ambassador” for Las Vegas Natural History Museum, announced Museum officials. This is the first-time in the 27-year history of the Museum that a celebrity has partnered with the Museum to further rally local and national recognition for the Museum and its current growth and expansion.

“When our team first met Jeff, we knew he was the perfect match to embrace and spread our message on education, science, archaeological discovery and the preservation of fossils and rich history found in our immediate surroundings,” said Las Vegas Natural History Museum Founder/Executive Director, Marilyn Gillespie. “We share the same family audience and passion for Nevada history as Jeff.”

“I am a naturally curious person and enjoy discovering new tidbits about my home here in Las Vegas. When I saw what the Las Vegas Natural History Museum was doing, I knew I had to be a part of it,” said Civillico. “I have been a family-friendly entertainer for my entire life….and blending my natural interests in science, discovery, and history with a family environment that is a showcase for Las Vegas and inspiring for kids—all in a way that is both intellectual and fun—is a perfect combination,” he said.

According to Gillespie, Civillico’s role will include being the celebrity ambassador for LVNHM in marketing, special events, corporate development, and special programming. 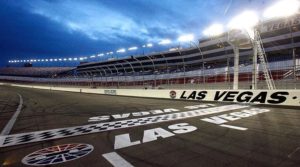 NASCAR fans attending September’s South Point 400 weekend at Las Vegas Motor Speedway will have even more luxury seating options to enjoy while watching the world’s best drivers compete at one of the sport’s top facilities.  Due to high demand and in an effort to provide a more enjoyable viewing experience for its fans, the 1.5-mile speedway is re-purposing some seating areas by adding 82 loge box seats in the Turn 4 area of its grandstands for the Sept. 14-16 races. The additional loge box seating – which is highlighted by swiveling armchairs, padded seating, all-inclusive food-and-beverage stations courtesy of Levy Restaurants, wait-staff service, and drink rails – will be located in front of the Earnhardt Terrace between Turn 4 and the start/finish line.

In March, LVMS debuted its loge seating with 82 luxury spots below the Richard Petty Terrace near Turn 1, and the new option was a consummate success. This September, dozens more can experience NASCAR racing like never before thanks to the enhanced seating area.

“The loge boxes were a huge hit during our Pennzoil 400 race weekend in March, and we can’t wait to offer the experience to more than twice as many fans this September,” LVMS President Chris Powell said. “This is just the latest and greatest improvement LVMS is implementing to help provide our fans with the best experience possible, and we are confident it will be extremely popular with our loyal race fans.”

See ya around town.