From the moment Kelly Clinton-Holmes stepped on the stage at the Italian American Club and sang “Help,” the capacity filled room sat back in their chairs and prepared for a very special and unusual show. It was a benefit for Cathy L MacLellan, who suffers from a severe disease, Rheumatoid Arthritis, and has had more surgeries than most people would have in two lifetimes! At last count it had passed 18 with at least two more ahead of her. The Super-Benefit had everything one would hope for: a great band and awesome headliners who turned up to help the cause.

Chadwick Johnson was the first to be introduced by hostess Clinton-Holmes, and he was terrific. He presented three songs including an original, “Another Time,” and closed his portion of the show with Vinnie Falcone at the piano singing, “The Impossible Dream.” It couldn’t have been more fitting, as of course Falcone was Robert Goulet’s conductor for a great many years, and it was Vinnie’s chart. And, Chadwick hit all the notes!

Next up was Frankie and big brother Joey, of the Scintas, who swung with three songs including Marvin Gaye’s hit song, “How Sweet It Is.” These two swingers from Boston, who have made their home in Las Vegas, are at the top of their game. Not only do they sing and swing, but they are very funny guys, especially Frankie once he gets going: he returned later on stage and did nearly seven minutes telling a story about his grandfather, which for me was a highlight of the night, as he had everyone just about rolling on the floor from laughing.

Janien Valentine, who was in the audience, came up and sang a beautiful and dynamic rendition of the Whitney Houston hit, “I Will Always Love You.” Wow!  That pretty much describes the reaction of the room.

Then it was time for the hostess to introduce her husband, Clint Holmes. He also was of course outstanding and performed three great songs, including the Cole Porter hit, “Night And Day,” and Paul Simons’ “50 Ways to Leave Your Lady.” All I can say is there are entertainers who love to sing and then there is Clint Holmes.  If you have a serious benefit you are putting together and you call Holmes, you will hear “where, when and what time!” That is definitely old school.

The entire evening reminded me of the days in the ‘60s and up to the late ‘80s when every hotel on the Strip during a given year would stage a benefit for one cause or another. They took turns hosting events and they were huge. The entire showroom would be donated to an event, or if it was real huge, the convention center inside a hotel would be turned over to the event.  And a few were so darn popular that at one annual charity event you had to be a Headliner on the Las Vegas Strip to be even considered: because everyone wanted to be there.  I remember being backstage in the Green Room for one major cause and in walked Charlton Heston, who had just flew up from Hollywood to be the host.

That’s when we had nothing but stars on the Strip and deserved to be called the “Entertainment Capital of the World.” I’m sorry to tell ya, but that no longer should be used to describe our little village!

Now it was for the final entertainer to make his appearance. And, just who was it to be? Who could follow the previous entertainers and close the show with a bang? Only one guy, Bob Anderson who stars on the Strip at the Palazzo in “Frank–The Man and Music.” And, gang, he killed with his impressions of such singers as Tony Bennett’s,” The Shadow of Your Smile,” Sammy Davis’ “What Kind of Fool Am I,” “Mack the Knife” by Bobby Darin and chiming in on the same song was Mel Torme and Nat King Cole. Anderson closed with a beautiful rendition of “The Curtain Falls,” a popular song originally sung by Darin and made popular again by Kevin Spacey in the move, “Beyond the Sea.”

All the entertainers were re-introduced by the loveable hostess, Kelly, and they joined together to close the night with, “The Birth of the Blues.”

The people who run the Italian American Club, from Angelo, Ben and Jimmy and their crew, made the night one of the most successful benefits in our village in a long, long time. The buffet and the room, including lights, sound, etc. were completely donated by the club. Every person including the entertainers purchased a ticket. That’s how I remembered Sunday Night, thinking and remembering those “Good Old Days!” It was a fabulous evening.

With the last few races of his 2015 NASCAR Camping World Truck Series (NCWTS) rookie season approaching, Ray Black Jr. and crew chief, Jason Miller, took a chance to review his season so far and grade his rookie performance. The driver of the No. 07 ScubaLife.com Chevrolet has learned a lot this year, and is looking forward to finishing out the season strong with another great finish at Las Vegas Motor Speedway this Saturday evening (Oct 3).

Black, who will be making his debut start at Las Vegas Motor Speedway this weekend, is coming off of two Top-15 finishes during these past two races, one of which (11th at Chicagoland Speedway) tied his second-best finish of the season. He also improved his career-best finish at New Hampshire Motor Speedway by seven spots.

“I’ve never run at Vegas, but I’m really excited about it,” said Black. “We’ve scored six Top-15 finishes during first-time track visits this year and with the momentum we have going on now, I see no reason why we can’t get a Top-10 finish at Vegas.”

Qualifying begins at 4:05 p.m., with drivers introduction set to start at 6:30, and the truck race will get the green flag at 7:00 p.m. General Admission tickets are priced at $29.00 with two special sections priced at $44.00, and free admittance to the Neon Garage area. It should be a great evening of top notch racing.

Here was another great event that got some play in the news, but should’ve had a wee bit more coverage. The TournEvent for Charities event pitted local Las Vegas celebrities and media professionals against each other in a $40,000 slot tournament benefitting the players’ charities of choice. This year’s winner, Steve Burke, publisher of Indian Gaming Magazine, won $10,000 for his favorite charity, the NIGA Spirit of Sovereignty. Combined with Everi’s contribution to Save A Warrior™, $80,000 was donated to charitable causes. 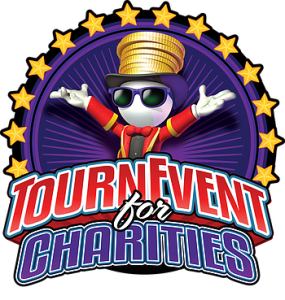 In all, Everi is contributing $40,000 to various charities selected by each of the players. Plus, Everi presented its charity of choice, Save A Warrior™, with a check for $40,000 to aid in their efforts to help U.S. veterans and active duty military personnel who are struggling with PTSD as a result of their service.

Twenty-one celebrities and local and media representatives participated in the tournament slots-style event in the Everi booth at Global Gaming Expo 2015. Rounding out the top five from the TournEvent for Charities were:  comedian Carrot Top who won $5,000 for Ronald McDonald House, Mike O’Brien of KKLZ Morning Show 96.3 who won $2,500 for The Rape Crisis Center, BMX pro Ricardo Laguna who won $2,000 for Jump for Joy, and television personality Robin Leach who won $1,500 for Keep Memory Alive.

The TournEvent for Charities, sponsored by G2E and Reed Exhibitions, serves as ‘pregame’ entertainment ahead of the TournEvent of Champions®, which will see 182 of the best tournament slots players across the country square off in a two-day event worth $1 million to the eventual champion. The championship round took place on Wednesday (Sept.30) at The Wynn’s XS Nightclub.

Well, gang, there you have it.