As most of my readers know, I began racing cars in Gardenia, California, at an old dirt track owned by A.J. Agajanian when I was 14 years old. It’s definitely still in my blood. I had to give it up, however, when I turned 76, for many reasons but primarily because of my family. Well now comes along a group of auto enthusiasts with actual money, who are going to actually build a motorsports venue on South Las Vegas Blvd (The Strip).  Wow, I had to know more about this!

So, I called and asked if I could meet with one of the principles, and dog-gone if the big guy himself said he would meet with me.  Oh, yeah, the name of this new project is “SpeedVegas,” and its CEO is Aaron Fessler.

As I sat in the board room awaiting his arrival I was expecting an older gentleman who had been around the block a few times, and was fulfilling a wishful dream. And, to my surprise, in walked this young looking, smooth guy, with a hefty handshake. I liked him right off the bat!

A little bit of background is appropriate at this point: Fessler is a very successful entrepreneur having built and sold multiple organizations. Prior to coming up with his newest adventure, Fessler had created “MediaSentry,” which became the largest provider of anti-piracy services for the motion picture and recording industries—to name a few of his clients would be like listing just about every major player in the entertainment industry. In 2005 Safenet (NASDAQ: SENT) came calling with a big check.  Prior to MediaSentry, Aaron had sold off his firm, “Allegro Group,” which had become the largest provider of electronic messaging services in the United States, for $40 million in cash and stock to Mail.com (NASDAQ: MAIL). So he has the money that’s for sure!

Of course, I presumed with this kind of background he would come from a family with the preferable silver spoon. Wrong!  He delivered newspapers as young boy growing up in Dayton, Ohio. At 16 he had saved up enough money and with permission from his dad, Robert, purchased an old Renault for $200. He kept that old car running and eventually purchased a better car, after selling the Renault for the same price he paid for it! His family consists of his wife, Kimber, and six children. They live in Summerlin.

“You might say I learned early on how to make the deal,” Aaron smiled. “I’ve always had a love for cars, and I liked to tinker around with them. Of course over the years I’ve owned a number of high powered cars, and one of my personal favorites was a Dodge Viper I had in 2007. That was one beautiful car to drive.”

SpeedVegas plans to open a 1.5-mile racetrack at Sloan Road and Las Vegas Boulevard (Not exactly on the Las Vegas Strip, but on Las Vegas Boulevard, about 10 miles south of the Welcome to Las Vegas Sign), just off Interstate 15. It should be open by March, 2016.  “Visitors will be able to actually get behind the wheel of an exotic car, or be strapped in to the passenger seat — of a Ferrari, Lamborghini, Porsche, Ford Shelby GT 500, Corvette Stingray and other vehicles for an “extreme, roller-coaster driving experience,” Fessler said. 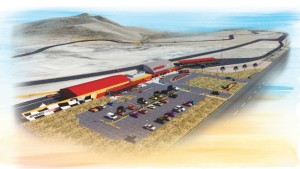 Options for a driving experience include paying $196 to drive four “adrenaline-inducing” laps in an American muscle car, or $445 to drive five “thunderous” laps in a “supercar” for an “exotic elite” experience, according to some marketing materials. According to the website: www.SpeedVegas.com., you can drive a Corvette Z06 for $49 a lap, or get behind the wheel of a Ferrari Italia for $89 per lap, and if you really want your ass to sink in a seat pay $99 for lap in a Lamborghini Aventador.

At a ground breaking ceremony a few months ago, Fessler commented, that “Las Vegas is a city of pleasure, and that the track would lure ‘thrill seekers’ of all ages and skill levels.” The racecourse would be the latest non-gambling attraction in America’s casino capital, where visitors increasingly are avoiding card tables and slot machines to shop, dine and party in nightclubs or go to shows. And it would intercept tourists streaming in from Las Vegas’ biggest feeder market: Southern California. Last year, 71 percent of visitors to Las Vegas gambled while here, down from 80 percent in 2010. Some 27 percent of visitors last year came from Southern California, and 94 percent of them drive in, according to GLS Research, in reports for the Las Vegas Convention and Visitors Authority.

Tourists here are “looking for extraordinary, once-in-a-lifetime experiences,” Fessler said. And his group may not stop with the racecourse; he’s considering, among other things, stunt and off-road tracks. We’ve got enough real estate to make that a reality,” he said.

Aaron, through his World Class Driving business, has offered road and track driving excursions in 45 cities. Speed Vegas, however, is his first permanent facility.

SpeedVegas is expected to cost $30 million to develop. That includes the site’s purchase price, project partner Scott Gragson said. And, of course this reporter asked if that budget figure is accurate, and Aaron responded in the positive. 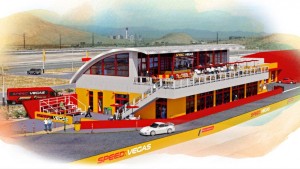 The project site is currently on about 90 acres, but investors are looking to acquire more land to bring the total to 100 acres, he said. Gragson is a real estate broker with Colliers International and an investor who, with partners, purchased the site in 2013 for $11.75 million from casino giant MGM Resorts International. The landowners are renting the site to the SpeedVegas.

“SpeedVegas” will offer experiences driving or riding in the world’s most sought-after exotic and muscle cars. Visitors will feel the true performance of these supercars on a course inspired by Formula One racetracks with rising elevations changes, sweeping turns and a straightaway that compares to the top circuits in the world. The masterfully designed course will be fully lit allowing for after dark experiences and events. The unique Las Vegas Event Center will accommodate thousands of people. The multilevel Welcome Center will have indoor and outdoor observation decks, a café, meeting space and much more.

“We are listening to the visitors, and to Las Vegas. Visitors are seeking extraordinary life experiences that they cannot do at home,” said Allison Raskansky, Vice President of Business Development for the project. “We have teamed up with some of the leading Vegas professionals, representing different segments of the tourism industry, to ensure SpeedVegas will deliver what the visitors are looking for and that Las Vegas will be proud to call its own.”

This project is the ultimate culmination of dreams from long ago by a young kid who purchased his first car for $200. Years of preparation, research and experience gathered by the owners of World Class Driving and the two prime founders of this project, Aaron Fessler and Tom Mizzone. They are also very proud of the fact that World Class Driving has been recognized by TripAdvisor as the # 1 driving experience for the past several years, and plan to continue exceeding the customers’ expectations with SpeedVegas.

First-time Rock and Roll Hall of Fame nominee Los Lobos will perform at the Henderson Pavilion this weekend. Tickets start at $15 plus tax and fees. The Grammy-winning band presents their brand of rock, blues, country and traditional Latino music, which includes polkas and ballads of Mexico. Fans will enjoy a compilation of more than 40 years of songs, including hits like the No. 1 cover of Ritchie Valens’ “La Bamba” and “Will the Wolf Survive?” and tracks from their recent album, Gates of Gold. To purchase tickets or for more information, visit cityofhenderson.com, call 702-267-4TIX (4849), or visit the Henderson Pavilion Box Office, 10 a.m.-5:30 p.m. Tuesday-Friday.

Over recent months, a group of local artists have come together in collaboration on a new and exciting endeavor that promises to benefit the entire Las Vegas community, and beyond. This labor of love has resulted in a premier, fully orchestrated, “In Concert” Musical Theatre Experience at Sam’s Town this Friday, Nov. 6th in the Convention center. Tickets range from $27.00 to $43.00 including tax and fees. Call the Sam’s Town box-office at 702-284-7777. 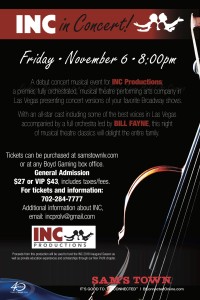 The newly formed group, led by our own Bill Fayne, seeks to engage music and theatre lovers of all ages. Each of their productions will boast a full orchestra, side by side with professional local performers, in gorgeous costumes, and in a concert version of your favorite Broadway shows. Directed and produced by local Las Vegans as well, these truly spectacular shows will also include local youth in both on stage and behind the scenes capacities. They will get to experience the entire range of theater, which hopefully will encourage them to include musical theater and the arts as a part of their daily lives and futures.

Presented by entertainment professionals from the Las Vegas Strip, Broadway, Hollywood and more through the not for profit chapter of INC Productions! While presenting a new experience to our audience is of the utmost importance, INC is also striving to provide a new experience for its performers. In order to do so, we are committed to offering a stipend for each person involved in our production, whether behind the scenes or center stage! Some of the people involved with INC PRODUCTIONS are: Bill Fayne, Laurina Hendrickson, Amanda Kaiser, Adrian Lomysh Campbell, and Ayler Evan.