If you have not yet travelled downtown to the Neon Museum, this month would be a good time to make the trip. The year 2016 gets off to an enriching start on Saturday, Jan. 16, at the Neon Museum with its third-annual “Stars and Stardust: Sidewalk Astronomy in the Neon Boneyard” event. The event will take place from 6:00 to 9:00 p.m., and offers stargazing especially for families, and is presented in partnership with the Las Vegas Astronomical Society.

The evening will begin in the dramatically illuminated Neon Boneyard before the lights are dimmed to afford a clearer view of the stars.  Participants in the “Stars and Stardust” astronomy event will enjoy using a variety of professional telescope equipment to observe the night sky.  Children will also enjoy a self-paced solar system scavenger hunt activity and making space-themed scratchboard art.

This program is part of the Neon Museum’s ongoing effort to provide enriching educational experiences to people of all ages in a culturally important setting.

A little background for those who are un-familiar with the museum: And, gang, I really recommend that you take advantage of this experience. As a resident of this village for the past 50 years, believe me, when I say there is a lot of history for you to see and feel.  It was founded in 1996, and is a non-profit 501(c) 3 organization dedicated to collecting, preserving, studying and exhibiting iconic Las Vegas signs for educational, historic, arts and cultural enrichment. 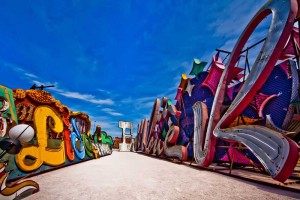 It has been named “Best Museum” by Las Vegas Weekly, one of “Sin City’s Best Retro Sites” by MSN, “No. 1 Las Vegas Museum Sure to Entertain and Educate” by USA Today’s 10best.com, “One of the Top 10 Coolest Things You Didn’t Know You Could Do” by Forbes.com, one of the “Top 10 Historic Spots in Las Vegas” by Vegas.com; one of “15 Most Fascinating Museums in the U.S.” by VacationIdea.com; and earns a consistent 4.5 out of 5 rating on TripAdvisor.

Andrew “Dice” Clay continues his current residency at the award winning Laugh Factory inside the New Tropicana with another fantastic laugh filled show set for Thursday, Jan. 21 through Saturday Jan. 23. Each show is scheduled for 10:00 p.m. with no set time for ending. There are rumors that he is planning on continuing to perform at the Laugh Factory on special weekends throughout the 2016 season. If that turns out to be a fact, he will join with resident impressionist Rich Little, who performs at 7:00 p.m. nightly except on Friday’s and Monday’s when he is dark.

Appearing this week at the Laugh Factory (Jan. 4 through the 10th) is three of the best at making you laugh. Heading up the show is Steve Hofstetter with Chas Elstner the featured act, and Taylor Tomlinson hosting the evening.

Author, columnist, and comedian Steve Hofstetter is often called the hardest working man in show-business. One of the top booked acts on the college circuit, the original writer for www.collegehumor.com has also released five albums and three books. Hofstetter has written humor columns for the New York Times, SportsIllustrated.com, and NHL.com, where he publicly admitted to being a Ranger fan. Steve’s tour schedule consists of over 100 colleges and dozens of clubs every year, and is fueled by an immense online popularity, tons of press, and a Prius with great gas mileage.

Chas Elstner has been a stand-up comic for over 24 years and has written, performed and produced two comedy albums “Is This Stuff Too Real For You?” and “A Man’s Home Is Her Castle.” Chas’ extensive comedic background includes performing as a featured clown in the Ringling Bros., Barnum & Bailey Circus, studying at the renowned Second City in Chicago and being nominated as one of the college “Entertainers of the Year” after performing at over 200 colleges nationwide. He has also performed as an actor in Off-Broadway productions.

Taylor Tomlinson started doing stand-up comedy at just sixteen years old, when she realized that her quiet, sarcastic asides were not being adequately appreciated by her peers. Her self-deprecating charm and conversational wit have made her a favorite at comedy clubs, colleges, and corporate events across the country. She was featured in her own weekly segment (“Young as Hell”) on Laughs on Fox and was seen on the 2015 season of NBC’s Last Comic Standing.

Just a reminder about one of my favorite entertainers, singer, writer and entertainer Mary Wilson from the legendary Motown trio, The Supremes, as she is returning to the Suncoast Showroom Saturday and Sunday,Jan. 16-17. While growing up in Detroit’s Brewster Projects, Wilson befriended Florence Ballard, Betty McGlown and Diana Ross when she was 13. The quartet later formed a singing group, The Primettes. Wilson, Ballard and Ross were later signed to Motown Records and became known as The Supremes.

The Supremes were nominated for a Grammy Award in 1965 and 1966, garnering an unprecedented 12 “Billboard Hot 100” #1 hits, including back-to-back awards for “Where Did Our Love Go,” “Baby Love,” “Stop, In The Name Of Love” and “Back in My Arms Again.” In 1977, Wilson released her first solo album, “Mary Wilson,” which yielded the dance hit “Red Hot.”  In 1992, Wilson released her first album in 13 years, “Walk the Line,” which included the single “One Night With You.” Between her solo efforts, Wilson released her autobiography “Dreamgirl… My Life As A Supreme” in 1986. The book has sold more than 250,000 copies and became one of the best-selling rock ’n’ roll autobiographies of all time.

The show begins at 7:30 p.m. each night. Tickets start at $20 plus taxes and fees and can be purchased at any Boyd Gaming box office by calling 702.284.7777 or visiting www.suncoastcasino.com.

Calling all artists! The city of Las Vegas is looking for artisan vendors to showcase and sell their work at the 2016 Bluegrass Festival’s Craft Market. The festival will be held Saturday, April 9, 2016, from 10:30 a.m. to 6 p.m. at Durango Hills Park.  Applications are free and must be submitted by Feb. 29, 2016, to be considered. Vendor space will be approximately 5 by 10 feet or 10 by 10 feet. All artists who create original Americana/folk art and crafts in any variety of media, including paints, sculpture, print work, photographs, fabric art, jewelry, ceramics, woodworking and home décor, are encouraged to apply. Please complete the free Vendor Application Form available at http://www.lasvegasnevada.gov/faces/home/office-of-cultural-affairs and follow the form instructions for submittal. Submissions will be reviewed by the city’s Office of Cultural Affairs management and the event coordinator. Artists are responsible for their own sales transactions and taxes, as there will not be any commission applied to the sales. For more information, call 702-229-3514 or visit www.artslasvegas.org.

In honor of Las Vegas native Kyle Busch’s 2015 NASCAR Sprint Cup Series championship, Las Vegas Motor Speedway is offering a special ticket discount to Nevada residents for the 2016 NASCAR Weekend.   From Jan. 1-18, 2016, Nevada residents with proof of residency can receive $18 off tickets for the Kobalt 400 or NASCAR Weekend by calling in and referencing the Kyle Busch deal. The special offer is in honor of Busch’s No. 18 Toyota, which he drove to the pinnacle of NASCAR this season.  Busch will be in Las Vegas along with defending champion Kevin Harvick and dozens of other NASCAR stars to compete in the Kobalt 400 on March 6, and Nevada fans can utilize the ticket offer for that Sprint Cup race or for weekend packages including Stratosphere Pole Day on March 4, the Boyd Gaming 300 on March 5 and the Kobalt 400 on March 6.  The discounted tickets are only available by calling 702-644-4444, are limited to four per account and are not valid with any other offer or previous orders. The offer is not valid in Section 2 and is only valid through Jan. 18.   Las Vegas Motor Speedway is a wholly owned subsidiary of Speedway Motorsports, a leading marketer and promoter of motorsports entertainment in the United States, and has been named SMI Speedway of the Year each of the last three years. For more information, visit SpeedwayMotorsports.com.

Well, gang, how was your New Year’s Eve night? Mine was smooth and very un-eventful: We had dinner at Table 34, one of the nicest restaurants in our village, and then we took in the Star Wars movie. Ended up drinking Champagne to top off the New Year at home with special friends. Here’s hoping that the year 2016 turns out to be wonderful for everyone, and that we get closer to peace on earth, and that all your wishes come to be!