This week the Laugh Factory inside the New Tropicana Resort will be truly a laughter factory with three of the best at making you laugh in attendance. Tom Rhodes is the headlining funny guy along with Lou Dinos and host Heath Harminson. As usual at the Laugh Factory there are two shows nightly at 8:30 and 10:30 p.m., with tickets starting at $34.95.

Fresh from releasing his new special “Light Sweet Crude” on Netflix and Chill.com, Tom Rhodes is ready to show Las Vegas how to laugh! Throughout his long, raucous career, Rhodes has covered just about every corner of the globe. He was featured in the Showtime stand-up series “Live from Amsterdam” in 2012, “Raw,” which was recorded for Swedish television in Stockholm, as well as in his own NBC sitcom, “Mr. Rhodes,” and two “Comedy Central Presents.” As a featured travel writer for Huffington Post, Tom received the honor of writing one of the Top 10 Best Travel Stories of 20 11, and his podcast, “Tom Rhodes Radio,” was named one of the Top 10 Best Podcasts of 2011.

Canadian-born comedian Lou Dinos’ career took off when he arrived in Hollywood and landed a supporting role in the feature film “Quicksilver,” starring Kevin Bacon and fellow comedians Louie Anderson and Paul Rodriguez. After several months playing the Sunset Blvd. Comedy Store and Laugh Factory, he hooked up with his childhood friend Howie Mandel, and for five years they toured theaters across the U.S. and Canada together, the highlight of which was Carnegie Hall.

Heath Harminson is one of the brightest young comedians out there. Harminson’s PG-13 style of comedy kills in clubs, colleges, cruise lines and festivals all over the world, including the Edinburgh Festival Fringe in Scotland. Heath has opened for some of the best comics in the business, including Louie Anderson, Dennis Miller and Eddie Griffin. His on-stage abilities are endless, from celebrity impersonations to singing, dancing and accents, and his quick wit allows him to adapt to any situation.

Also continuing as a resident comedian is Tommy Savitt, who has nailed down the early show goers with his 5:00 p.m. show three nights a week, with two additional 7:00 p.m. shows. Tommy’s show is not your typical stand-up performance. No, indeed! See he is better known in the mystic world as Tommy Lama the nearly outlawed “Guru” of “see all, know all, and heal all problems.” He has been known to assist in all divorces with the outcome becoming exactly what the court ordered. One of his more famous saying is, “All the doctors tell ladies to quit drinking when they become pregnant to protect the baby…I say why? How in the heck do you think you became pregnant in the first place?” Call the Laugh Factory for exact days of all shows and pricing, 702-739-2411.

The City of Henderson announced it has added another concert to its fall lineup at the Henderson Pavilion, 200 S. Green Valley Pkwy. TeenTopia, which will feature performances by rising pop stars Los5, After Romeo and Siahna, will start at 6 p.m. on Friday, October 14. Tickets are $15 and $20 (plus taxes and fees).

LOS 5 is an emerging boy band formed in Los Angeles, by way of Mexico, Argentina & Brazil. “The 5 Of Them” consists of Juan Pablo Casillas (lead vocals), Matt Rey (rap vocals), Ismael Cano, Jr. (guitar & backing vocals), Hector Rodriguez (bass guitar) and Tomas Slemenson (drums). The band is inspired to make music that projects positivity into the world.  Earlier this year, they were national radio host Elvis Duran’s Artist of the Month and performed on the Today Show with Kathie Lee Gifford and Hoda Kotb. Most recently, LOS 5 won the Macy’s iHeartRadio Rising Star competition and will be performing along with U2, Drake, Sia, TwentyOnePilots, OneRepublic, Billy Idol and other popular artists at the iHeartRadio Music Festival.

LOS 5 will be joined by pop and R&B band After Romeo. Coined “the next One Direction” by People Magazine, pop and R&B band After Romeo formed when two sets of friends – Drew Ryan Scott and Jayk Purdy from Las Vegas and Blake English and TC Carter from Athens, Georgia – met in Los Angeles in 2013. The group has already made an impact on the music scene and in schools nationwide. In 2014, After Romeo partnered with several artists on a 300-school and 35-mall Bully Proof Tour, which included a viral anti-bullying campaign and garnered 10,000 attendees in every city. The group’s new singles, “Good Things” and “Convenience,” are featured in a global Samsung commercial. The band recently collaborated with Grammy-award winning producer Dave Aude to remix the After Romeo fan-favorite single, “Good Things,” which is continually climbing the Billboard Club Chart.

Siahna is a talented, classy, and spirited teenager. She was America’s sweetheart from NBC’s The Voice, Season 9. Siahna secured a record deal with Arena Music in Seattle. She will be releasing her single “WARRIOR” this September followed by her EP The Journey Begins in the fall.

A brand new live stage show, “One Epic Night!” debuts Monday, Aug. 29 at the Plaza Hotel & Casino for a limited engagement featuring various finalists from blockbuster talent competition shows, like “The Voice,” “America’s Got Talent,” “Masters of Illusion,” and “American Idol.” The 70-minute, all ages show runs Saturday through Wednesday at 7:00 p.m. beginning Aug. 29 until Jan. 4 inside the Plaza’s iconic showroom. On some Saturdays, the show offers a 4 p.m. matinee instead of the 7 p.m. performance (September 17, 24, October 8, 15 and November 5, 12). The show is dark from Dec. 1 – 20. 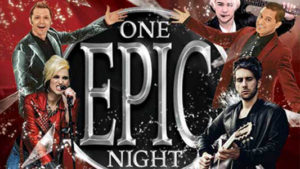 Produced by Frank DiMaggio and Nick Padgett of American Dream Concerts in association with Bonkerz Comedy Productions, the new show showcases audience favorites from top TV talent shows backed by a live all-star band featuring nationally known artists Stet Howland, Michael T. Ross and Brent Muscat. The show’s performers from popular TV talent programs include: Megan Ruger, a contestant from season six of “The Voice” and season 10 of “American Idol;” Will Champlin, who placed third on season five of “The Voice;” Jarrett and Raja: “The Magic and Piano Guys,” who were contestants on “Masters of Illusion” and “Shark Tank” and were Howie Mandel’s wild card pick on season seven of NBC’s “America’s Got Talent;” and James Durbin, a singer and guitarist from Santa Cruz, Calif., who finished in fourth place on the 10th season of “American Idol.”  “As seen on TV, and now at the Plaza…there is simply nothing else like this show in Las Vegas,” Jonathan Jossel, CEO of the Plaza Hotel & Casino, said. “One Epic Night will offer guests an unforgettable live stage show experience starring audience favorites from megahit TV talent shows. From music to magic, this show offers entertainment for everyone and is one more reason for tourists and locals to come downtown to the Plaza.”

Ticket prices start at $59.95 for general admission, $79.95 for preferred seating, and $109.95 for VIP tickets that offer preferred seating and a meet and greet with the performers. In addition, hotel guests at the Plaza can buy one ticket and get one free while locals (with valid Nevada identification), children (12 and under) and members of the military (with ID) can save $20 per ticket. A special “dinner and a show” package is also available for $130.35 per ticket and includes a three-course prix fix dinner at Oscar’s steakhouse and a preferred seating show ticket. Ticket prices do not include taxes and fees. Tickets are available by calling 702-386-2507 or online at www.plazahotelcasino.com.