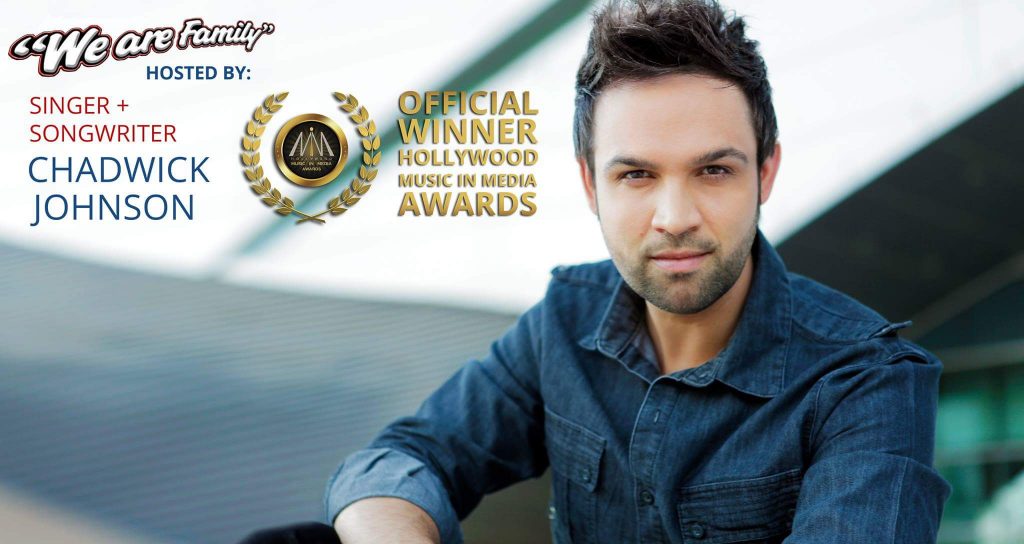 Award winning singer, songwriter and a personal friend, Chadwick Johnson will host “We Are Family,” a benefit and fundraiser for local Veterans and Seniors presented by The Vegas Voice at the Silverton Hotel & Resort, Wednesday, June 8, with the doors opening at 6:00 p.m. and show time set for 6:30 to 9:00 p.m.


Also on the schedule is a presentation of the First Annual “Rosie Award” being presented to the Investigative Team of Channel 13, Action News, Darcy Spears and Kean Bauman. The Vegas Voice, working with the Nevada Association to Stop Guardianship Abuse has taking up the cause of venerable seniors and those with disabilities who can fall prey to unfit court-appointed guardians.

“I am honored to be a part of this show and to help The Vegas Voice recognize the work that the Channel 13 team has done to bring attention to this important cause,” Chadwick Johnson said. Johnson is an award winning singer, songwriter known for his soulful approach to music and love of original musical interpretation. He has played for some of America’s most celebrated icons including a command performance for President Clinton. Since moving to Las Vegas, Chadwick has wowed audiences and has performed in some of the most prestigious venues in town including: The Aria, Encore, Mirage, Wynn, Monte Carlo, Suncoast Casino, Cabaret Jazz at The Smith Center and the Hakkasan Nightclub.

Clark County Commission Chairman Steve Sisolak will give the Keynote Speech. There will also be an incredible silent auction and a raffle.

This is some good news for those of you out there who love to laugh, and would like to go to a funny show before dinner, or just have nothing do at 5:00 p.m.  If laughter were the law, Tommy Savitt would throw the book at you. Well, maybe not. But he will make you laugh out loud. Savitt is opening as a residence comedian at the Laugh Factory inside the New Tropicana Resort on Thursday, June 2nd at 5:00 p.m., with his favorite persona, Tommy Lama: as a satirical
self-help guru. During his performance, he will more than likely tell a couple, “that I guarantee I can cure any marriage”.

His quitting law school to become a comedian may not be considered the best career choice, but for Tommy, it was the right one. Born in New Jersey and raised in Brooklyn, Tommy’s law background helps him take logic and break it down in order to make people laugh at just about anything. Tommy is a multi-award winning comedian whose slow and simple delivery on stage makes him a crowd favorite while he mixes education with comedic wit. A working comedian for over 15 years, he has been seen on WGN’s The Bob & Tom Show, SI TV’s Funny is Funny, Comcast’s Boston Comedy Festival, National Lampoon, and  Man Up Stand Up on MAVTV.  As an actor he has many commercial and stage credits, including appearances in commercials for Adidas, Monster.com, and Lowe’s, and starred as Horatio in Love’s Labours Los at the Expanded Arts Theatre in New York City. His CD “Who Wants Me Now!” is one of the top requested comedic segments on satellite radio. One of his comedic thoughts in his Persona as the priest, “For those who say the glass is half empty, I tell you to break that glass and cut them.”

“They recognize me once they hear my voice”, Savitt says of the multitudes who listen to his clips several times each week on Sirius/XM’s Blue Collar Comedy satellite radio stations. “Some people are flying or driving from other states to catch my show, just to watch and hear  ‘Tommy Lama’ bless an audience. I am truly blessed.”

Tommy has been recognized in the comedy industry having won the Boston Comedy Festival in 2007, the Seattle Comedy Competition in 2008 and the 2015 Ventura Comedy Festival. He was also honored with Best in Comedy category at the 2009 and 2011 LA Comedy Awards. Having a heart as well as a funny bone, Tommy has dedicated much of his time performing for our troops here and abroad. This has taken him to military bases in Afghanistan, Guantanamo Bay, Japan, South Korea, Bahrain, the United Kingdom, Germany, Belgium, the Netherlands, Curacao, Honduras, and Ecuador. He has even performed at the United States Embassy in Belarus.

I’m personally looking forward to an interview with Tommy Savitt, or whoever actually shows up. For ticket information call the Laugh Factory box office at 702-739-2411. Tickets range in price from $29.95 to $39.95 plus tax and fees.

Rich Rizzo’s Las Vegas Follies will be presented on Friday, June 10 at Ron DeCar’s Event Center, 1201 Las Vegas Blvd. South. Get ready for the stylized choreography of Rich Rizzo and the infectious enthusiasm of a cast of talented senior performers. This dazzling production show is pure entertainment – a fusion of music, singing, comedy and dancing. It is the brainchild of Rizzo, who has gathered an impressive group of senior showgirls and dancers who light up the stage with the glitz and glamour of a true show biz experience!

“The Best Ticket in Town” includes the exhilarating performance of internationally acclaimed impersonators Frankie Kein and Manuel Arte and their special friends Marilyn, Liza and Joel. Sensational songstress Teresa Cushman is also featured in the Follies debut. Cast Members and dancers Include: Suzanne Jipson, Teri Thorndike, Shirley Cina. Judy Daines, Reese Richman, Jody Walker, Jackie McDaniel, Rizzo, Kein, Bambi Jones and Michael Leonetti.The Las Vegas Follies is the creation of Rizzo. His inspiration has been drawn from more than forty years of experience. In his early career, he was a featured dancer in numerous television productions including Soul Train, The Oscars with Jacquelyn Smith, and the Golden Globes with Rita Moreno. The stars he has performed with include such noteworthy artists as Ann-Margret, Tina Turner, and Gladys Knight. In his early thirties, he began choreographing and directing under the tutelage of famed producer Donn Arden. He traveled world-wide creating productions in Portugal, Spain, Rome, Morocco, Italy, Mexico, and Japan. Choreography, he discovered, was his first love. He is best known for his masterful choreography in the long-running Jubilee in Las Vegas, and the Lido shows in Las Vegas and Paris. Tickets are on sale and priced from $22.00 for general admission, $38.00 for VIP seating, with a $42.00 ticket getting you the Golden Circle.

Renowned Pink Floyd tribute artist The Machine will bring their one-of-a-kind performance to The Yard inside Topgolf Las Vegas on Friday, June 10, 2016 at 9:00 p.m. General admission tickets start at $27 and are on sale now.

The Machine has forged a 20-year reputation of celebratory performances, extending the legacy of Pink Floyd, while creating another legacy all their own. Over the years, The Machine has touched the hearts and souls of many, selling out theaters, large clubs and casinos across North and Central America, Europe and Asia. The New York-based band focuses on making every show an authentic “Floydian” experience for their fans. Known for performing a diverse mix of The Floyd’s extensive 16-album repertoire, complete with faithful renditions of popular hits as well as obscure gems, The Machine’s stellar musicianship, dramatic lighting and video, and their passionate delivery sets them above and beyond the rest.

The members of The Machine include founding members Joe Pascarell (guitar, vocals),  Tahrah Cohen (drums), as well as longtime stage mates Ryan Ball (bass, vocals) and Scott Chasolen (keys, vocals). Doors for The Machine will open at 8:00 p.m. and show time is 9:00 p.m. To purchase tickets, please visit www.topgolf.com/lasvegas, or call Ticketmaster at 1-800-745-3000.This is a show for all-ages. VIP experiences, including premium hitting bays overlooking the performance. Topgolf is located at 4627 Koval Lane, Las Vegas, NV 89109.