The cavalcade of Dean Martin celebrations at the South Point has ended, at least for a while that is. It all started last Friday at 7:30 p.m. when Deana Martin, daughter of the legend, walked out on the stage of the South Point showroom, and began to sing music made famous by her father. Had he lived to be there with her, Dean would’ve been 100 years old on June 7. Of course, he wasn’t there, but his daughter definitely was! And what a show it was too.

Her husband, John Griffeth, had dug through a ton of photos, film clips, television shows, and personal collections to compile a set of films that were used throughout the 90-minute performance, to present her father to the audience in various stage of his illustrious life. It was fantastic. I watched men and women wiping little tears from their eyes as they remembered a certain moment in their own life that Dean’s presence in film brought back.

One of the highlights on the Dean Martin television show was the magic door. During the show at one time there would be a knock at the door, and in would walk some celebrity: from Bing Crosby to a Beatle. One never knew who would be coming through that door, let alone Dean. Well John and Deana resurrected that magic moment during her stage show, and this past weekend was extra special.  During the two nights (Friday and Saturday) her list of surprise guests included: Entertainer Billy Hinsche, actor Tony Lo Bianco, Rich Little, Dennis Bono, and quarterback Vince Ferragamo. Incidentally, both nights were SRO, and that was with extra chairs being brought into the showroom.

But those two nights were not the end. Oh, no! There was still Monday evening. Again, Deana and John, with the help of the Entertainment staff of the South Point Hotel, our former Lt. Governor Lorraine Hunt-Bono, and I’m sure others behind the scenes, had decided to bring back the Dean Martin Roasts (had run on television from 1974-1984), in the showroom. The Roastee would be Dennis Bono, who hosts a weekly radio show from the showroom every Thursday afternoon. So, eight roasters were summoned to roast the guy who performs in front of an audience of more than 400 every week, and which is heard by millions across the country. The roasters for this special evening were: Deana, Tony Lo Bianco, Robin Leach, Rich Little (an original member of the real roasts), Clint Holmes, actor Robert Davi, Lorraine Hunt-Bono, and Frankie Scinta. Again, there was not an empty seat. And did the audience have a good time. Well, let’s put it this way, they couldn’t stop laughing. I’m not going to pick any one person out for special applause because each roaster was terrific.

However, there was a guest who does need special mention, and that was the appearance of Ruth Buzzi, who played an ex-wife of Dennis’.  It was absolutely a show stopper!  Ms Kelly Clinton-Holmes played the part to perfection!

And the evening was still not done. Oh, no! There was the after-party in the recently remodeled Grandview Lounge following the Roast, where local entertainers would have a chance to thank Dennis for his years of supporting many of them as guests on his radio show. Zowie Bowie, was billed as the host but had to leave early, so he turned over the host duties to one of the funniest comedians ever, and a Las Vegas resident, Dennis Blair, who kept it running smoothly (for an off-the cuff cast of singers, and comedians). The Joey Singer Band, with Bob Sachs on bass, and Mike Mechem on drums, accompanied the various entertainers, and did one heck of a job. It isn’t easy when they call out a song, and just maybe a key. Thank God, these guys were the top of the chart musicians. Those making appearances included: Clint Holmes, Frankie Scinta, Bobby Brook Wilson, Pia Zadora, Sonny Turner, Michael Monge, Wes Winters (who plays every Friday and Saturday in the Grandview), Cushney Roberts, and Rita Kim. It was a wonderful night of great entertainment.

And, it must be told, both the Roast and the After-Party benefited Opportunity Village. I say let’s have more of the Roasts!

Grab onto your golden, sequined coat tails and hold tight because the wonderfully chaotic world of The Miss Behave Game Show, the greatest night out you never even knew you wanted, is coming to the Las Vegas Strip. This fast, feverish, frantic, frenetic, frenzied and just down right fun night of entertainment that will kick the dust-off variety for good, opens at the recently-converted Back Room at Bally’s Las Vegas Friday, July 7.

Changing lives one game at a time in a show with no rules and where everyone’s a winner, The Miss Behave Gameshow is a one-stop-shop of an evening which will bring out the best and worst in us all with a host of prizes and variety acts – both occasionally of questionable quality – thrown in for good measure. This international comedy hit will entice audiences to step out of their comfort zone and immerse themselves into the sinful world before them. Guests will be pitted against other audience members in a series of challenges, some involving their phones.

In a world where no one can spend three seconds away from swiping, calling, playing, or tweeting comes a show where you need your phone. Tweet, text, call – The Miss Behave Gameshow is all about getting interactive on the audience’s terms. Except there are no terms, or rules – it’s the most anarchic playtime out there.

“We’re thrilled Ann Wilson is making a special stop in Las Vegas during her 2017 solo tour” said Patrick Hughes, CEO, and president of Fremont Street Experience. “Fremont Street Experience is always a nonstop party, but we’re turning it up a notch this Independence Day Weekend and invite everyone to come down and enjoy a free concert from one of the best female vocalists in rock music history.”

Downtown Rocks turns it up “One Louder” for concertgoers and Fremont Street Experience fans by featuring signed autograph giveaways, band meet-and-greets and VIP cards. Visitors can also relive and share their Downtown Rocks experience through a custom photo backdrop.

For complete information on the headliner concerts and nightly entertainment, visit www.vegasexperience.com

Based on the writings of Lewis Carroll’s “Alice in Wonderland” and “Alice Through the Looking Glass,” ALICE: A Steampunk Concert Fantasy combines original arrangements of favorite pop/rock songs with unforgettable vocals, thrilling dancers and a hot nine-piece band, to create a frenetic theatrical experience. It is directed by Ryan Kelsey and Anne Martinez, choreographed by Ryan Kelsey and Claudia Mitria, featuring Ashley Fuller, April Leopardi, Eric Morgan, Adolfo Barreto, Jeffrey DeBarathy and the BBR Band. 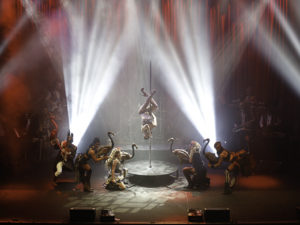 ALICE: A Steampunk Concert Fantasy is performed the second Monday of every month, beginning Monday, July 10, 2017. Cover charge is $25 at the door, which includes a complimentary specialty cocktail. Doors and a special cocktail hour begin at 9:00 p.m., with the show beginning at 10:00 p.m. Guests must be 21 years or older. For more information, please visit www.redrocklasvegas.com or www.alicelv.com.

Well, gang, that’s the “It’s the Norm” report on an exceptional three evenings at the South Point. I hope you had the opportunity to enjoy it like I did. It was absolutely the best three nights I’ve spent in a long time.