Not only is my wonderful friend, Deana Martin, performing two evening shows at the South Point Showroom, this coming Friday and Saturday at 7:30 p.m. but she’s hosting a down-to-earth celebrity roast just like her father used to host for national television. Last weekend she and her husband, John, travelled to Steubenville, Ohio, to help the town celebrate her father’s 100th birthday–had he lived. “I must’ve shook three thousand hands,” she said, holding out her right hand which was still a shining red.

During Bono’s roast, guests can expect to hear hilarious stories from Las Vegas entertainment legend’s illustrious career and good-natured jokes from Martin and the rest of the night’s celebrity roasters. In addition, as Martin celebrates her father’s 100th birthday with shows on Friday, June 23 and Saturday, June 24, at the South Point Hotel fans are in for a special treat as this show also pays homage to Martin’s “The Dean Martin Celebrity Roast” television show.

Following the roast, an after party hosted by Chris Phillips (Zowie Bowie) and Dennis Blair will take place with a variety of musical performances in the Grandview Lounge at 8 p.m., with doors opening at 7:30 p.m. The birthday celebration doubles as a fundraising event for Opportunity Village, a local Las Vegas nonprofit that provides services and resources that help adults with intellectual disabilities lead enriched and productive lives. Please visit Opportunity Village’s website for more information on the organization.

Tickets for the Deana Martin Celebrity Roast honoring the ‘Man of the Hour’ Dennis Bono are available to purchase for $35 and the Dennis Bono After Party tickets are available for $20. Guests planning to attend both shows can purchase a package ticket for $50 online and at the South Point Box Office.

For more information on upcoming entertainment or to purchase tickets, please call 866-791-7626 or visit the South Point Entertainment website.

Beverly Hills Rejuvenation Center (BHRC), one of the nation’s leading high-end medical spas, will debut in the Las Vegas Valley with the opening of two locations in the Summerlin area: Boca Park in July and Downtown Summerlin in late August.

Founded in 2005 by Devin Haman and Dan Holtz, BHRC has quickly become the go-to medical spa for celebrities such as international model and star of Bravo’s “Real Housewives of Miami,” Joanna Krupa; television and film actor, Dean Caine; reality star, Shanna Moakler; and television actress, Morgan Fairchild. Celebrities have described BHRC as a “fountain of youth” and the premier facility to go to look and feel great.

“Personalized service, the latest, most impactful treatments, top-of-the-line products and a team of well-trained specialists come together to offer the best possible results for our clients,” said Haman. “We look forward to bringing our winning formula to Las Vegas.”  Holtz added, “At BHRC, we pride ourselves on our tailored treatment protocols. We’ve seen first-hand the profound difference treatments have made in our patients lives, and hope to continue improving the lives of those seeking a healthier lifestyle as we expand.”

For more details on the opening of the Boca Park and Downtown Summerlin centers, please visit www.bhrcenter.com

Song stylist Jonathan Karrant returns to Palm Springs on June 24, and San Diego on June 27 to pay tribute to the First Lady of Song, Ella Fitzgerald “Jonathan Karrant is one hip jazz vocalists, born to sing and swing with style.” Jazz Corner Singing classic selections from Ella’s Cole Porter and Irving Berlin albums as well as some have her signature songs such as, Mr. Paganini and How High the Moon. Jonathan’s album, “On and On” hit #4 on jazz charts. He has received honors throughout the states including; the New York City Jazz Cabaret Honors, “Best Singer” for the Bravo California Awards and was named one of the top 12 rising jazz vocalists in New York by the NYC Jazz Record. “A voice, romantic without being cloying, warm but not forced, Jonathan carries songs with an emotional weight that reaches your soul. At the same time, he can swing with the kind of jazz suave that was patented by Mel Torme.” Cabaret Scenes From classic selections of the American Songbook to bringing his own jazzy twist to contemporary songs, you’ll be thrilled by this engaging young singer.

Legendary comedian, actress, writer, and activist Roseanne Barr is returning to Las Vegas for a special performance at the Grand Events Center inside Green Valley Ranch Resort on Saturday, September 9 at 8 p.m. Tickets start at $25 and go on sale Friday, June 9, 2017 at 10 a.m.

Tickets for Roseanne Barr are $25, $35, and $45 plus tax and applicable fees for reserved seating. Doors open at 7 p.m. and guests under 21 years must be accompanied by an adult 21 years or older. Tickets can be purchased at any Station Casinos Reward Center and The Fiestas, by logging onto www.stationcasinosevents.com or through Ticketmaster at (800) 745-3000 or www.ticketmaster.com.

Roseanne, one of America’s funniest comedians, has another side that not many people have seen. Born in Salt Lake City, Utah, she worked as a dishwasher during her teenage years. She worked doing stand-up comedy until her 1985 appearance on “The Tonight Show Starring Johnny Carson,” which thrust her into the limelight.  In 1987, HBO offered her a show of her own, “On Location: The Roseanne Barr Show,” which was canceled after a short time. In 1989, Roseanne starred opposite Meryl Streep and Ed Begley Jr. in “She-Devil” and her sitcom, “Roseanne,” ran for nine seasons on ABC. In 1996, she was nominated and won a Golden Globe Award. After “Roseanne” was canceled, she went to Broadway to play The Wicked Witch of the West in “The Wizard of Oz,” to rave reviews. In 2014, Barr starred as judge on “Last Comic Standing” and her hit show “Roseanne” will reportedly make its return in 2018. 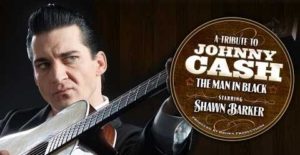 “Man in Black: A Tribute to Johnny Cash” will bring Cash’s classic hits to The Orleans Showroom on June 30 and July 1.  Johnny Cash rocked the country music scene with his unique baritone vocals and acoustic guitar. His top hits included “Folsom Prison Blues,” “Ring of Fire,” “I Walk the Line,” and “Ballad of a Teenage Queen.” Throughout the 1950’s and 1960’s, Cash released more than 100 hit singles, making him one of the most influential musicians of the 20th century. The country music legend also went on to become one of the best-selling artists of all time, with more than 90 million records sold worldwide. Cash’s music has crossed over multiple genres, which won him inductions into the Country Music, Gospel Music and Rock and Roll Halls of Fame.

Since 2005, Shawn Barker has performed his celebrated “Man in Black” tribute show all over the world. His high-energy performance recreates Cash’s iconic sound and signature style down to his acoustic guitar and harmonica. Barker’s show features hits from Johnny Cash’s entire musical career, including his duets with the late June Carter.

Showtime is 8 p.m. Tickets start at $15.95 plus tax and fees, and can be purchased by calling Ticketmaster at 800-745-3000; online at www.orleanscasino.com; or in-person at gift shops inside The Orleans, Suncoast, Gold Coast and Sam’s Town. Tickets may also be purchased the day of the show (depending upon availability) at the venue box office.
That’s it for this week,