One of Hollywood’s most iconic stars is coming to the Las Vegas Strip in “Marilyn! The New Musical,” an original musical based on the life of Marilyn Monroe. The show will be opening at Paris Las Vegas with preview performances beginning May 23 and a grand opening June 1, just in time for Marilyn’s birthday. Written, directed, and produced by Tegan Summer, CEO of Prospect House Entertainment, in partnership with Authentic Brands Group, owner of the Estate of Marilyn Monroe, the new musical will feature acclaimed Broadway actress Ruby Lewis as the resident Marilyn Monroe.

“Marilyn! The New Musical” features 20 original musical numbers as well as classics like “Diamonds Are a Girl’s Best Friend” and “My Heart Belongs to Daddy,” telling the story of one of the world’s most famous women, from her days as Norma Jeane overcoming a difficult childhood, to her meteoric rise to stardom and becoming one of the biggest and most enduring sex symbols of all time.

“Marilyn Monroe is a true American icon and there is no better way to bring her story to the stage than through a unique American art form: the musical,” said Summer. “Marilyn has always been an inspiration to me because she is the ultimate story of the human condition, and I have always been fascinated by the dichotomy between Norma Jeane and Marilyn. The story will pull at the heart, touching anyone who is reaching for something greater than themselves and to persevere no matter what the obstacles.”

“Marilyn continues to inspire today’s performers, influencers and fans regardless of gender or age,” said Marc Rosen, SVP Entertainment, Authentic Brands Group, owner of the Estate of Marilyn Monroe. “Tegan and his team have created a dynamic show that audiences are going to love. We’re so excited to tell this story and look forward to Marilyn! becoming a staple on the Las Vegas Strip for years to come.”

Representing the essence of the era of Marilyn Monroe with a modern twist, the set will feature dynamic, innovative, contemporary design that retains all the beauty and nostalgic elements of the Golden Age of Hollywood.

“Marilyn! The New Musical” will perform Tuesday through Sunday at 7 p.m. Ticket prices start at $49, plus applicable taxes and fees, and can be purchased online at Ticketmaster.com/Marilyn starting Friday, April 6 at 10:00 a.m. PST. An exclusive presale for Total Rewards members, Caesars Entertainment’s loyalty program, will be available from Wednesday, April 4 at 10 a.m. PT through Thursday, April 5 at 10 p.m. PST.

DjangoVegas! Gypsy Jazz Festival returns to the Historic Fifth Street School, 401 S. Fourth St., Saturday, June 16, from 4:00 to 10:00 p.m. The annual celebration of the music of Django Reinhardt and other gypsy jazz musicians, past and present, will feature Black Market Trust, Harmonious Wail with Bjorn Thoroddsen, and Hot Club of Las Vegas.  A local musicians jam session will be held from 4:00 to 6:00 p.m.; this session will be open to anyone who wishes to participate. Performances start at 6:00 p.m. Tickets are $20 plus tax for all ages. Parking will be available in the garage between Third and Fourth streets at Clark Avenue and refreshments will be available for purchase.

Don’t miss the annual Children’s Summer Concert Series, an engaging program designed to provide an opportunity for families to enjoy the arts. Held at 10:30 a.m. every Wednesday (Charleston Heights Arts Center, 800 Brush St.) and Thursday (Historic Fifth Street School, 401 S. Fourth St.) from July 11 to August 2, these concerts will explore music through songs, movement, and stories. Interactive workshops, included in the cost of admission, will give children the opportunity to discover their inner artist.  Featured artists include Trout Fishing in America, Sonia De Los Santos, Jazzy Ash & The Leaping Lizards, and Story Pirates. Tickets for each show are $5.00 plus taxes and fees and will be available for purchase beginning June 2; a series package also will be available. Groups of 10 or more are eligible for group pricing.

Story Pirates will perform again Saturday, Aug. 4, at the Historic Fifth Street School, 401. S. Fourth St. Tickets are $7.50 for children under 18 and $15 for adults, plus taxes and fees. This special encore performance will include refreshments and a meet-and-greet with performers.

For tickets and more information for these and more events, visit www.artslasvegas.org or call 702-229-ARTS (2787).

For the fourth consecutive year, The Bullring at Las Vegas Motor Speedway will pay homage to Las Vegas-area police, firefighters, EMTs and other first responders at Hometown Heroes Night this Saturday. Fans visiting the 3/8-mile paved oval on Saturday not only will be treated to 10 feature races, but also fun activities, prize giveaways and an extended Opening Ceremonies. Representatives from local police, fire, EMT and first-responder agencies will display several vehicles at the track behind Turn 1 and will participate in virtually every aspect of the evening’s festivities, from the national anthem and presentation of colors to the waving of the green flag to start the night’s races.

All area police, fire and first responder personnel with a valid ID, along with up to four members of their families, will receive free admission to The Bullring. Gates open at 5:00 p.m. Pacific Time, with Opening Ceremonies commencing at approximately 6:45 p.m. 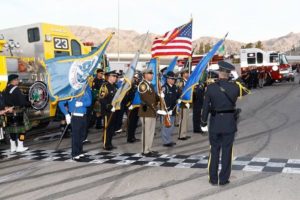 On the track, the three-day US Legends “Showdown” will culminate with separate 25-lap features for the Semi-Pro/Young Lions and the Pro/Masters classes. Saturday night also will include Southwest Tour Trucks and USAC HPD Midgets races, a 50-lap NASCAR Super Late Models feature, and appearances by the Southern Nevada Multi-Jurisdictional Color Guard Team and the Nevada Police and Fire Emerald Society Pipe and Drum Band.

Gates open for the “Showdown” at noon on Thursday and Friday, and while admission is free, concessions will not be available those days. Racing will start at 4:30 p.m. and 5:15 p.m., respectively.

A fun and affordable family entertainment option, The Bullring offers $2.00 hot dogs and Coca-Cola products and $3.00 Budweiser beers in addition to favorable admission prices, and all children 12 and under get in free with a ticketed adult. Spectators can save money by purchasing tickets in advance by visiting or calling the LVMS ticket office at 702.644.4444 or online at www.LVMS.com. 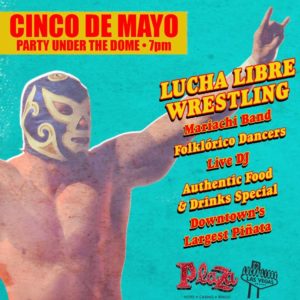 The Plaza Hotel & Casino is planning downtown Las Vegas’ biggest party to celebrate Cinco de Mayo. The Plaza’s Cinco de Mayo party is free to attend and will be under the bright lights of the property’s iconic dome beginning at 7 p.m. on Saturday, May 5. The party will feature a variety of entertainment, including eight Lucha Libre wrestling matches. A Mariachi band and Folklorico dancers will entertain guests under the dome and will bring the festivities inside as they parade through the Plaza’s casino floor. A DJ will also be at the dome party spinning top radio hits with a mix of Latin music.  The Plaza will again have downtown’s largest piñata with prizes, including cash, match play vouchers, free drink coupons and food vouchers. Authentic food and drinks specials will be available all night long, including street tacos from Zaba’s Mexican Grill, Margaritas, Micheladas, Modelo beer and shots of Patron Tequila. For more information, please visit: www.plazahotelcasino.com .

Well, gang, I’ll probably run into you at one of the above events. See ya then.