The Mint 400 is here this week, and of course downtown Las Vegas will be a busy village for the rest of the week. There was a huge parade of the various race vehicles from Sunset Blvd. to Fremont Street earlier today, ending with a party at Atomic Liquors around 2:00 p.m. As many of you may know, in 1967, this writer came up with the idea of creating an off-road race for the purpose of publicizing the Annual Deer Hunters Contest.

To do that we (the Mint Hotel now a thing of the past) hired two young men who were assembling some dune buggies (we purchased one for the Deer Hunters Grand Prize), LeRoy Wickham and John Sexton. To promote the event the two men also agreed to drive a dune buggy from the Mint Hotel to our sister hotel in Lake Tahoe as a publicity stunt for the hotel. A photographer from the New Bureau was assigned to go alone with the two desert experts. Herb Hill, an official with NASCAR at the time (and a dealer for Valvoline Oil), and Mayor Oran Gragson, waved the starting flag as they left the parking lot of the Mint Hotel. Six days later the pair of buggies checked into the Sahara Tahoe Hotel. They had set a world record for traveling from Las Vegas to Lake Tahoe by going only off-road (except the last leg from Carson City to the Lake).

After many meetings with executives of the hotel, Johnson (me) was directed to go ahead and begin planning a budget and to hire Wickham and Sexton to lay out a probable race track. The two men spent over two weeks in the desert finding a route from Las Vegas to Beatty and back. The course was determined and the race had a total budget of $30,000, of which $15,000 was the guaranteed purse. More than 60 agreements between land owners had to be obtained, permission from the Bureau of Land Management took a little arm twisting but was obtained, and a date was selected. 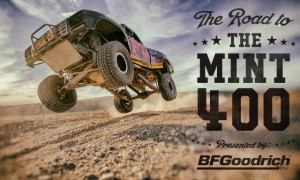 Needless to say the race was a huge success, and the Mint 400 Off-Road Desert Rally went into the history books as one of the many events staged in the City of Entertainment. Today, under the management of Matt and Josh Martelli of Mad Media it is once again the “Big Daddy” of off-road racing. At one time the Mint had more than 480 entries. Today the Bureau of Land Management limits the entries to 330. The Martelli Brothers told this writer that if allowed they could break the old record established by the Mint in the ‘70s.

A few of the events scheduled for this week include The Method Race Wheels Time Trials at 11:00 a.m. Thursday out behind Buffalo Bill’s in Primm. This is a great spot to watch the Million-dollar Trick Trucks perform at their best over a closed-course with fantastic viewing for the public. Then later that evening, downtown, the Miss Mint 400 Crowning will take place, along with the highly anticipated Pit Crew Challenge. Miss Mint 2016 will be crowned at 7:00 p.m. at 8th and Fremont Street, with the Method Race Wheels Pit Crew Challenge following immediately at the same spot.

During the race, which gets underway Saturday near Primm and spreads out for 130 miles in the desert, you will be able to track all race vehicles in near-real time using your iPhone. Download the app here. You can learn more about the tracking system here. Tracking will also be available online at TheMint400.com, Race-Dezert.com, UTVUnderground.com, PolarisRZR.com and BFGoodrichTires.com.

A wonderful side note for you who may remember the “good ol’ days.” Rod Hall, who will be the Grand Marshall for the race this year, was one of the first to compete in the Mint. He also won the Mint, the Baha 1000, the Baha 500 numerous times, plus most all events he ever entered. This is a well-deserved honor for this veteran of the desert.

This writer remembers always seeing his smiling face as he motored around the desert with a huge cigar stuck in his mouth (In those days we only had open faced helmets). One time I was stuck between trees (I missed a turn coming down a winding trail from a mountain during the Baha 1000) and Hall came along in his Jeep. He tossed me a rope, attached it to his jeep while I did the same to my single-seat buggy, and pulled me out of my predicament. Within a minute or so off he went to get back into the race. I had been stuck there for nearly 40 minutes before he stopped. That is sportsmanship of the first caliber. I have never forgotten that. That’s why he is a champion among champions.

Anyway gang the Mint is back in all its glory!

I’ve been a wee bit remiss with my review of Chadwick Johnson’s fabulous performance at the Italian American Club last month.  As you know I’m a “motorhead” and last week was filled with NASCAR happenings, and this week it’s the Mint 400. So here is my review on my friend at last.

Chadwick has started his own tradition of late, and that is performing in “The Round,” with the stage set in the center of the showroom. I think it’s the best way for a performer to reach his audience. Just my opinion.   Johnson’s new show, ‘Addicted To Love’ celebrated LOVE in every sense of the word with remakes of songs by artists like John Legend, Roy Orbison, and Sam Smith as well as a handful of Chadwick’s very own originals!

The band, called “LV Retro Vibes,” is comprised of Jason Corpuz on keyboard, Fernando Tort on bass, Jeremy Klewicki on drums, Jorge Machain hitting those wonderful chords on the trumpet and Flugel horn, with Carlos Mata-Alverez on sax, flute, and clarinet, are the best. For a little over 90 minutes the standing-room-only crowd was mesmerized with Johnson’s charisma, range of songs and fantastic music.

Southern Nevada’s only food bank, Three Square is teaming with up with another local charity Create A Change Now to bring fresh produce to children in the community who struggle obtaining nutritional options. Since joining forces last August, the pair has provided more than 1,000 students a five-pound bag of assorted fresh produce to take home to their families. Create A Change Now and Three Square continue to expand the positive collaboration by adding a one school each month throughout the school year, increasing the number of children and families benefitting from fresh fruits and vegetables they might not have access too otherwise.

More than 126,000 children in Southern Nevada live in a “food deserts,” and struggle with hunger. This partnership allows both organizations to fulfill their mission of education, making healthy choices and simply feeding each child with wholesome foods that will help them develop and thrive. Create A Change Now is a nonprofit organization that is committed to educating and empowering children and their families by providing the resources needed to tackle childhood obesity and related diseases. If you want to help or obtain more information on Create A Change Now please visit, www.createachangenow.org, Facebook, Twitter or call 702-300-7399.

For more information on Three Square please visit, www.threesquare.org, Facebook, Twitter or call 702-644-FOOD (3663).  I can’t recommend a better way to help those unfortunate to be caught in a bad place than this effort.